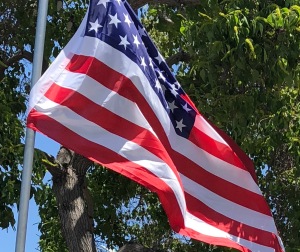 These last few weeks have been difficult. Many Americans who reside in this land we call the United States of America, don’t feel very united. My own heart and mind have been sad and confused. The USA feels unnatural to me; almost foreign. Some things are recognizable but many other things aren’t. Just when I thought I couldn’t bear to listen to one more disturbing news report, or read one more Facebook post about this nation and our government, I got a wonderful invitation that ended up being a perfect gift as I leave this country to live in another.

We met at work in 2016. Although he was originally from Mexico, he’d been living in Texas for more than a decade with a green card. He’d made his life here. His sons were born here, his career was here and his dreams of the future were here. As we grew to know each other better, I questioned this soft-spoken man about why he’d never gained his citizenship. I explained that his vote was needed. All the votes are needed to accurately represent the people of this country.

Over the next two years, with the help of our company and others, he hired an attorney and began this long process. There were meetings to attend, paperwork that had to be completed and so much WAITING. Every now and then I’d ask where he was in the process, and he’d respond that more time was needed. As time went by, and more changes were made with regard to immigrants, I was nervous that it might not materialize. I quit asking about it months ago.

I resigned from work in early June to spend time with family and friends on the west coast. I returned to Texas with only two weeks to sell my car, spend time with friends and finalize my international move. With a To-Do list a mile long, I received a text: “I have my ceremony for my naturalization of citizenship this July 19!!!!” and the text message included big, smiling emojis and a USA flag. I immediately responded to his text and quickly, within a few comments, I replied, “I would love to come.”

I’ve never been to a naturalization ceremony and was thrilled to be spending it with my friend and his sister. The room was filled, standing room only. Everyone was dressed so nice, many wearing the Stars and Stripes on their selected attire. Many others chose the simple colors of Red, White or Blue. Excitement was in the air. It was thrilling! Cameras were clicking non-stop.

After clearing security, he was separated from us, and was escorted into a large room with the other 100 qualified applicants. After waiting 45 minutes, the family and friends of each of the applicants, were released to take our seats in the same large room. Lucky us! We were seated across the aisle from him and were able to take photos from this vantage point. 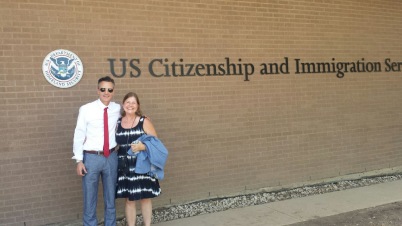 The décor of the room, the videos, the songs and the speeches squeezed our hearts. After spending a month in beautiful California, my heart swelled at the physical beauty of this nation. Surrounded by a hundred eager faces, the visual images of our National Parks and the encouraging quotes of historical figures began to thaw my icy feelings about this country. One by one, each of the 35 country names were called out, and those from that country stood up.

The joy of these 101 was contagious and it spread throughout the room as their names were called. There was clapping, yelling, tears and awe. The presenter mentioned that some of the 101 had been through much to get to this point, and as we all stood together, we were honored for them to join us as American citizens.

It was an amazing ceremony that left me changed. I am thankful to be an American. I did nothing to deserve it, but was simply born here and given rights and privileges that so many do not have. I feel a responsibility to teach and encourage others to dream of what is possible inside a broken world. When I arrive in my new “home” country, I will strive to be an ambassador of the United States of America, and set an example of love and truth. It will be my goal to develop empathy in my new students.

How many immigrants do you have as friends?

One of the things I miss the most about living overseas is having global friends from many countries. I’ve searched to find international connections in Dallas but it has been difficult. Although Dallas is a large city with a multinational population, many live in the suburban areas surrounding the metroplex and I live near downtown. I’ve found that these populations segregate themselves together in neighborhoods of people like themselves. This is so different from Istanbul. Every kind of person lived together, in close proximity, inside the crowded city. It was common to walk everywhere, so you saw, and heard, foreign people constantly on the sidewalk beside you. Here in Dallas, there are many miles between us – in more ways than one. I’ve participated in several Meetup groups hoping to find friends who have lived overseas but for one reason or another, I haven’t made the connections I’ve hoped for.

When I moved back to Dallas earlier this year, I moved to an area of town I was unfamiliar with. Hoping to find new friends close to home, an out-of-state friend mentioned that I might like to learn how to play American MahJong. This popular game has a Chinese history and is played worldwide. I searched in my area but had no luck in finding an established group. I posted a humble notification on the Next Door app to members of my new local community, and to my surprise I had 30 responses from strangers who also wanted to learn how to play. I set up a meeting place at a local restaurant and the rest is history.

In the months that followed, others jumped in to help organize and smaller groups formed based on weekday, weeknight or weekend play date availability. New friendships formed between the members and this week we celebrated our new friendships by having a holiday progressive dinner party, between three homes, right here in my neighborhood. As I looked around and observed the laughter and enjoyed the delicious food and drink, I felt so proud to have started this group and brought so many people together.

I also attended my first Internations Meetup this past week and it was so enjoyable. I sat with four women from Ukraine, Jamaica, Ireland and India. They all encouraged me to attend the upcoming holiday party. Sometimes I get discouraged because it is more difficult to find global friends here but I’ll press onward. A person can never have too many friends.

Do you live in a new place and are you lonely? What might you do to bring people together? You will be delighted at the results. 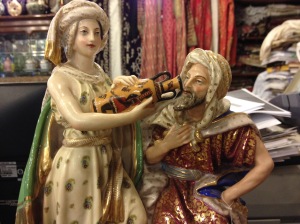 During the past few weeks, I’ve been writing schools and checking out websites of potential employers. As of this morning, there are 58 Art Teacher openings posted on the Search Associates website. As I contemplate the possibility of moving to a new country, I am reminded of all the learning that one goes through upon immersion into a new culture. I am both excited by it and unnerved by it. The adrenalin rush that an expat feels upon arrival in a new country is not easily forgotten. Cleaning out some old documents, I came across this list I made of a few of the things I learned in Turkey:

As I venture onward into this recruiting season, I am faced with another season of transition. I know the excitement of moving and the hardships of immersion. Finding the right “fit” of a country, and a school, is of upmost importance. Decisions should be made carefully and wisely, and for me, with a lot of prayer.

What questions do you ask yourself to know if a big change in your future is a step in the right direction?