Proud To Be a Non-Conformist 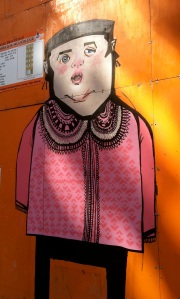 Months ago I signed up for a conference in Portland, Oregon called the World Domination Summit. This summit was Chris Guillebeau’s creation. For the past two years I’ve been following Chris’ blog, The Art of Non-Conformity. He fascinates me both with his advice on traveling the world and his ability to inspire his readers. Tens of thousands of people follow his blog and his “small army,” as he calls his followers, live all over the world. This army of people is changing the world, one day at a time, in very diverse ways. One thousand small army members have joined forces to learn from one another in Portland this weekend.

On Thursday, I flew from DFW to PDX by myself. I didn’t know anyone on the plane and I don’t know anyone in Portland. I had an idea that I would likely be one of the oldest “army” members, as this summit has much to do with new technologies in the forms of blogging, eBook publication, world travel and living life without conforming and it seems to me that thirty-somethings have the corner on this market. There was a slight hint of fear in me if I stopped long enough to give that negative energy a foothold in my mind, but I tried not to. These little, creeping fears included thinking I’d be “too old”; fear of knowing how to get from the Portland airport to my hostel, fear of feeling inadequate amongst these amazing small army members, fear of fitting in. I love adventure and making friends from all around the world and I really do believe I have something to offer the world in myself, so I didn’t allow these feelings of fear sit for too long in my head in the days leading up to the summit. Every time one of these little, creeping fears started to tickle my imagination and turn my stomach, I’d squash it the way you would an annoying Texas mosquito by reading a blog from an inspirational writer or imagining what exciting paths could be opened to me at this summit if I would only just keep walking in that direction.

From her blog, Shanna Trenholm posted an article for those of us arriving in Portland who had never attended WDS before. Her mindful advice helped soothe my restless soul. As I was reading her list of “pitfalls”, I connected with one in particular:

“You’ll struggle with comparison-itis. You will be sure that everyone else is living a remarkable life, that your life is the only small life in the room. Stop it. Don’t fall into that trap. It isn’t true. Being remarkable is on a continuum and it can be measured in many ways. Make your own measure. Create your own amazing.”

Create your own amazing. Isn’t that wonderful? I wanted to share it with you.

Finding my way to the hostel, I remembered the last time I was in Portland about 25 years ago. At that time I attended the NCECA conference. It makes me smile to remember that even back then, I went to Portland by myself. I’ve never forgotten it and always yearned to go back. So here I am.

This is a very partial listing of a few of the seminars I’ve gone to and persons I’ve listened to:

This week why don’t you try something different? Give yourself to the world. You’re awesome and the world needs you. Get involved and don’t ever stop.

Oh, yeah. The first day I arrived I found a super hip, interesting and fascinating group at the summit: The WDS Baby Boomers!!! Why was I worried? 🙂

Home of the Brave 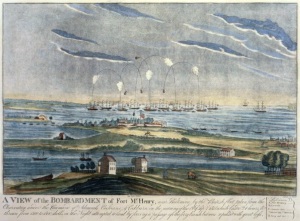 Exercising the muscle of courage.

We can influence the world even though we’re afraid. This was the case for Francis Scott Key, an American attorney, who had an important role during the War of 1812. The war had lingered on for two years. The Americans had been defeated during the Battle of Bladensburg, which led to the burning of public buildings in Washington, D.C. The British were fighting, both on land and on sea, to invade Baltimore, Maryland. Mr. Key and Colonel John Stuart Skinner were invited to board a British ship to negotiate the release of three prisoners. From the ship, Key watched The Battle of Baltimore take place. He was not allowed to leave and the war raged on for 25 hours.

At dawn, through clouds of smoke and fire, Key could see the American flag still waving at Fort McHenry and he reported this to the prisoners below deck. Eventually, he was released, and on his way back to shore, he was inspired to write a poem about the scary and amazing experience he had just endured. In due course, this poem was put to music and this popular song was then played during military occasions and celebrations. During WWII, the song was performed at the beginning of every baseball game and this practice become an American tradition. In 1931, President Herbert Hoover signed a law adopting it as the national anthem of the United States. Although shaken up from all that he’d witnessed that day, Mr. Key found the courage to scribble down the lines of a poem, and new traditions were born.

Someone tells me at least every couple of weeks, “You are brave.” I don’t really feel brave, in fact, I feel afraid much of the time but it doesn’t matter; my vision and my hope is bigger than my fear. The “fear of the unknown” is the worst kind of fear. Our imaginations can run havoc inside our heads. I have found that once I learn about my fear, and examine it, the fear lessens. Ignorance often contributes to our fears, so I’m always working towards being informed on topics that I’m fearful about. Research your questions and ask for help from people that have confronted the same sorts of fears. Find a community of encouragers. If the advice you receive is coming from a place of cautionary fear, and if you’ve evaluated the situation to a point that you feel comfortable with the possibilities, jump. It is also okay to decide, after evaluating, NOT to do something. Do what feels right for you, but be honest with yourself.

C.S. Lewis said the “Peace is not the absence of conflict, but the ability to cope with it.” In the same way, courage cannot be seen as the absence of fear. Fear, or the possibility of fear, will always be there. It is easy for our dreams and goals to collapse if we allow fear to rule. Certainly it is good to be cautious, but taking the path less traveled can lead to fantastic results. You can’t change the world or influence others by staying in your comfort zone. Being brave is an active decision and it takes practice. Why not start now?

I have found that instead of allowing the “what ifs” and negative chatter to take up residence inside my head, I make steps towards my courageous choice, as if it has already happened, or IS happening as I act upon the choice. You must constantly turn your imagination to visualize the future within this courageous choice.  Also, be aware and notice the consequences that line up as you act upon your courageous choice. Doors start to open, while others start to shut.

Are you ready to be brave? Eleanor Roosevelt said, “You gain strength, courage and confidence by every experience in which you really stop to look fear in the face. You must do the thing you think you cannot do.” She also said, “The purpose of life is to live it, to taste experience to the utmost, to reach out eagerly and without fear for newer and richer experience.” Eleanor, you were a brave woman!

So what are you afraid of? Visualize yourself “inside” your dream and start walking toward it. Practice being brave and influence the world around you. Are you exercising the muscle of courage?